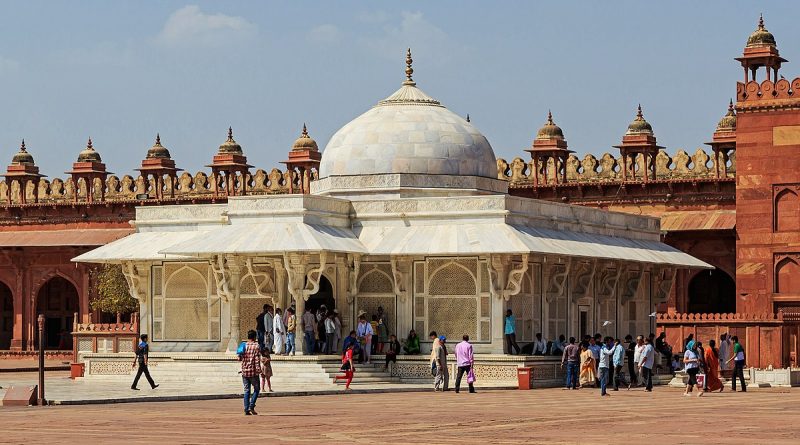 Delhi is an interesting city filled with wonders of the past that have witnessed the history of the entire country in the making. The beauty of this old city is unmatched as it is filled with monuments, palaces, and forts that have a deep link to the Empires that ruled India from this city such as the Mughals. Apart from Delhi, there is another city in Northern India that has served as the capital of the Mughal Empire and that is Fatehpur Sikri. The city has deep historical ties to one of the most famous Mughal emperors, Akbar the Great. If you too want to embark on a road trip from Delhi to Fatehpur Sikri, you have come to the right place to get all the information that you may need for your visit. 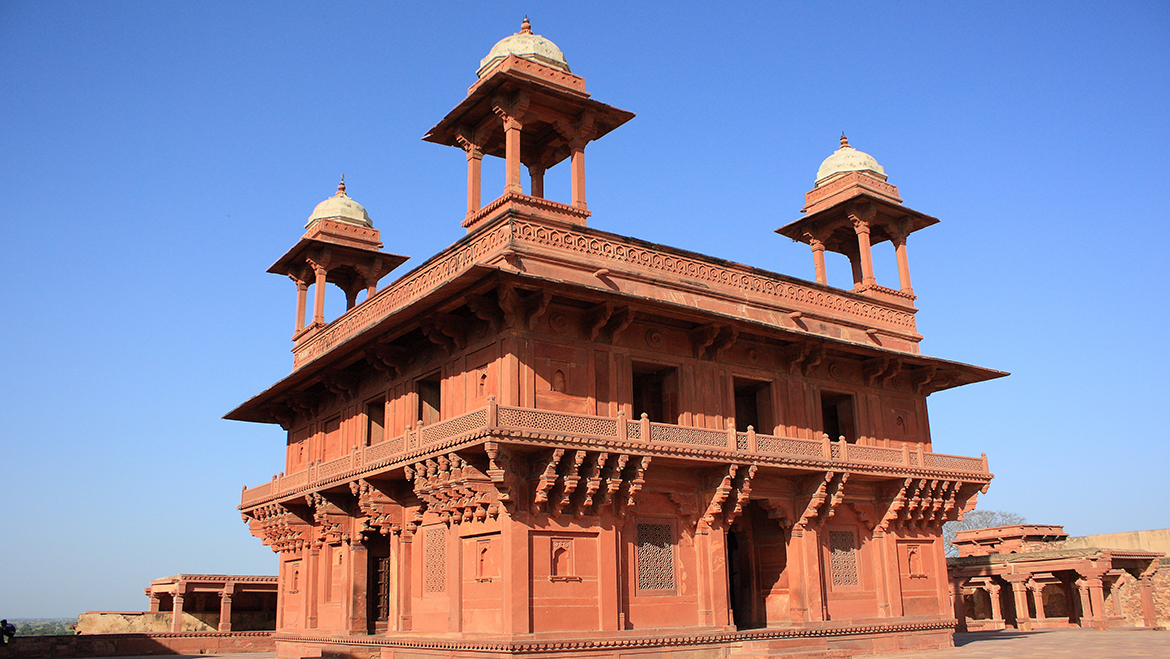 This was a court that was used to entertain the private audience and to hold confidential meetings with the Mughal emperor. The Diwan-I-Khas is a beautiful building which houses several important parts within. The most important one is called the Lotus Throne. The building has two stories and it is square. The entire building is made with red sandstone which was also used extensively in the forts of that era gives it an appealing look.

The Lotus Throne is the throne within Diwan-I-Khas on which the Mughal Emperor Akbar used to sit and address the courtiers. There is a huge ornate column on which Akbar’s throne was placed and people could enter from the four directions to meet him. The column has Hindu, Christian, Muslim, and Buddhist imagery and architecture styles. This is said to be the physical representation of the religion that Akbar started called Din-I-Ilahi, and which also ended after Akbar’s demise. 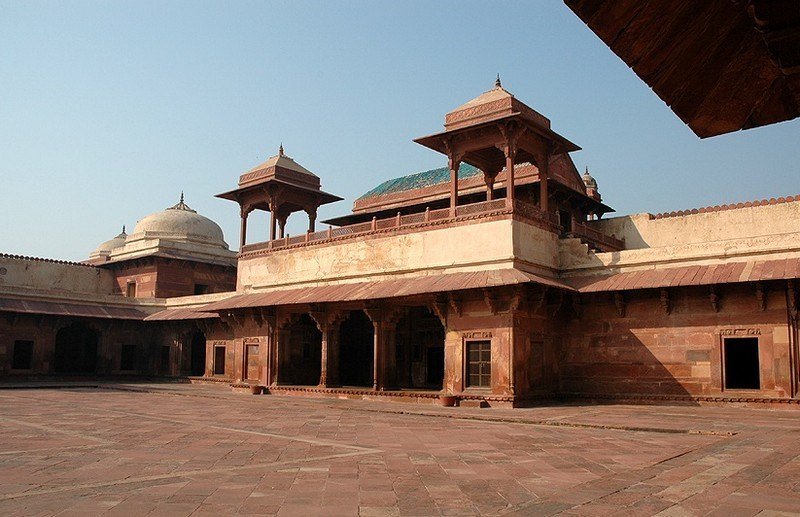 The residence of Jodha Bai who was one of the wives of the emperor Akbar. She was also the mother of the crown prince Salim, who was later crowned as the king Jahangir. The construction of the palace has been done according to the prevalent Pardah system of the olden times. The place exhibits Rajput and Mughal architecture and is made with red sandstone just like Diwan-I-Khas. 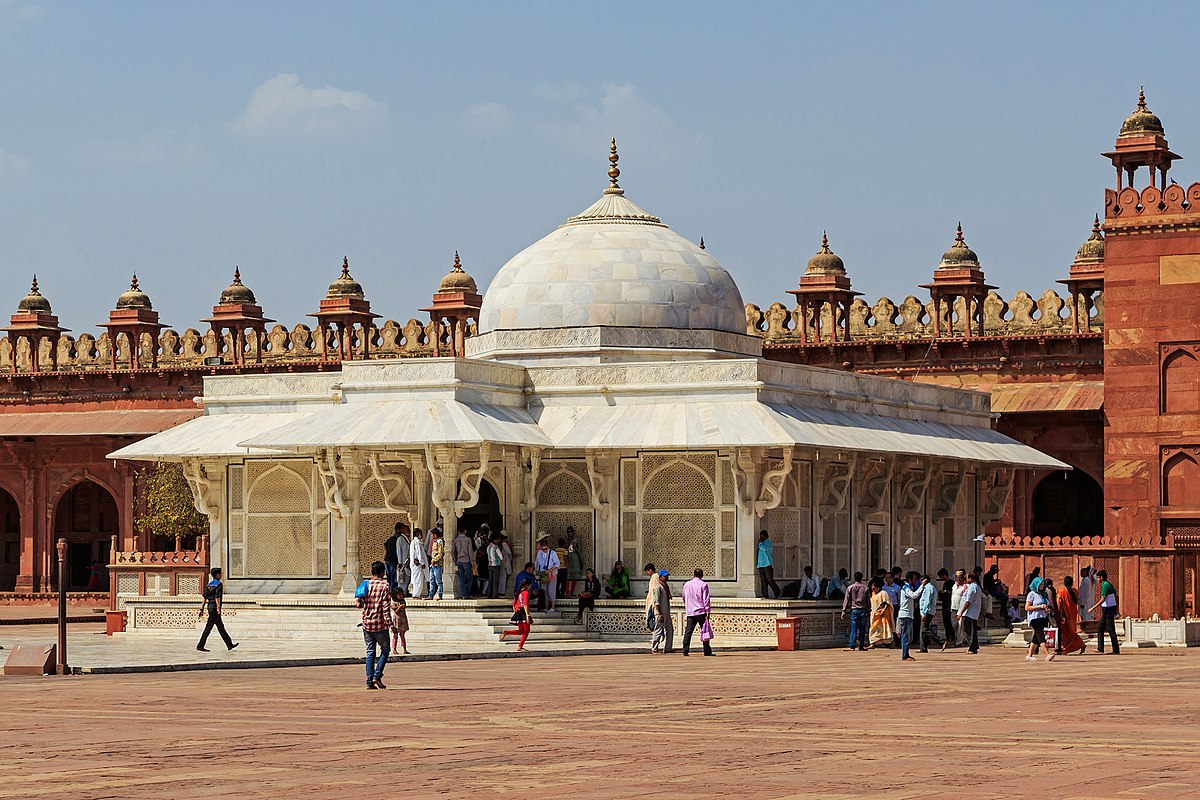 The earthly remains of the Sufi saint Salim Chishti are housed in this beautiful tomb. Every year millions of devotees come here to pray and pay their respect. The saint Salim Chishti was able to correctly predict the birth of Emperor Akbar’s son which was longed for a long time by Akbar. The entire structure is made in white marble which has excellent architectural wonders of the Mughal. 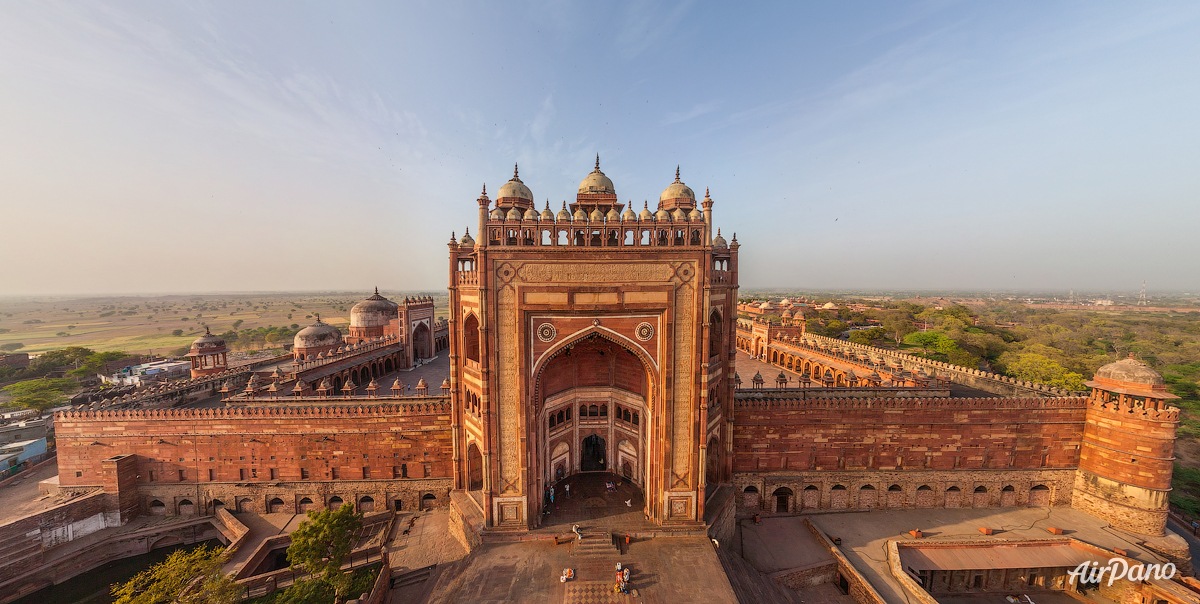 After Akbar won over the Khandesh, this door was constructed by him in the year 1601. This is one of the highest gates in the world and literally translates to “gate of glory”. 43 steps lead to the gateway which is semi-octagonal in shape. It is 54 meters in height and has 15 stories. 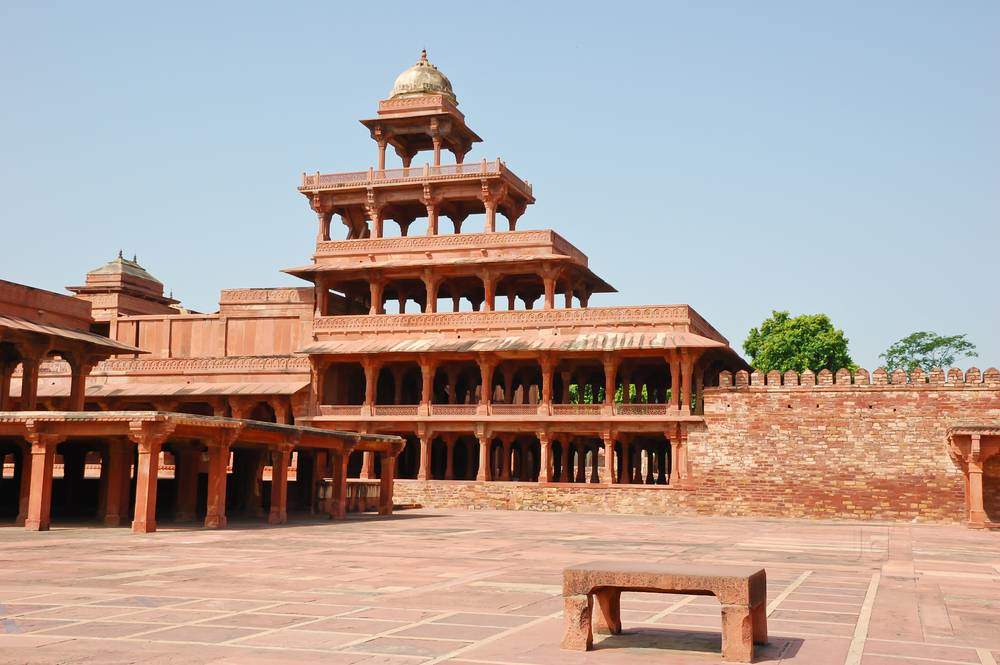 The Panch Mahal is located close to the palace of Jodha Bai and has five stories. It is made in red sandstone and uses the Persian architectural style. The floors of this palace are descending in size which gives it a unique look and feel. This palace had a lot of musical performances that took place here in times of Akbar. 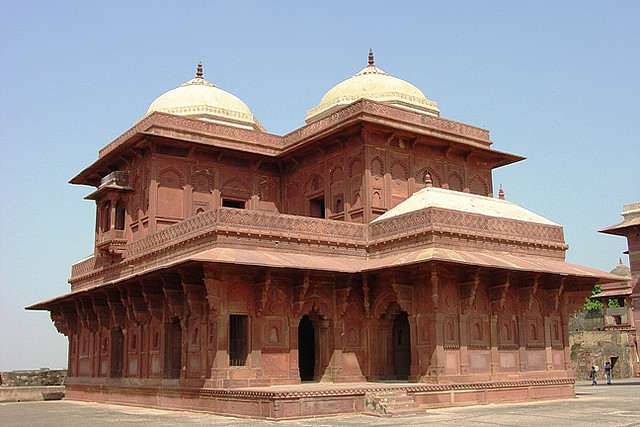 Next to the palace of Jodha Bhai there is another palace called Birbal Bhawan. It is located inside the fort premise and once housed one of the favorite advisors of Akbar, called Birbal. It has an intricate design and double-domed construction. 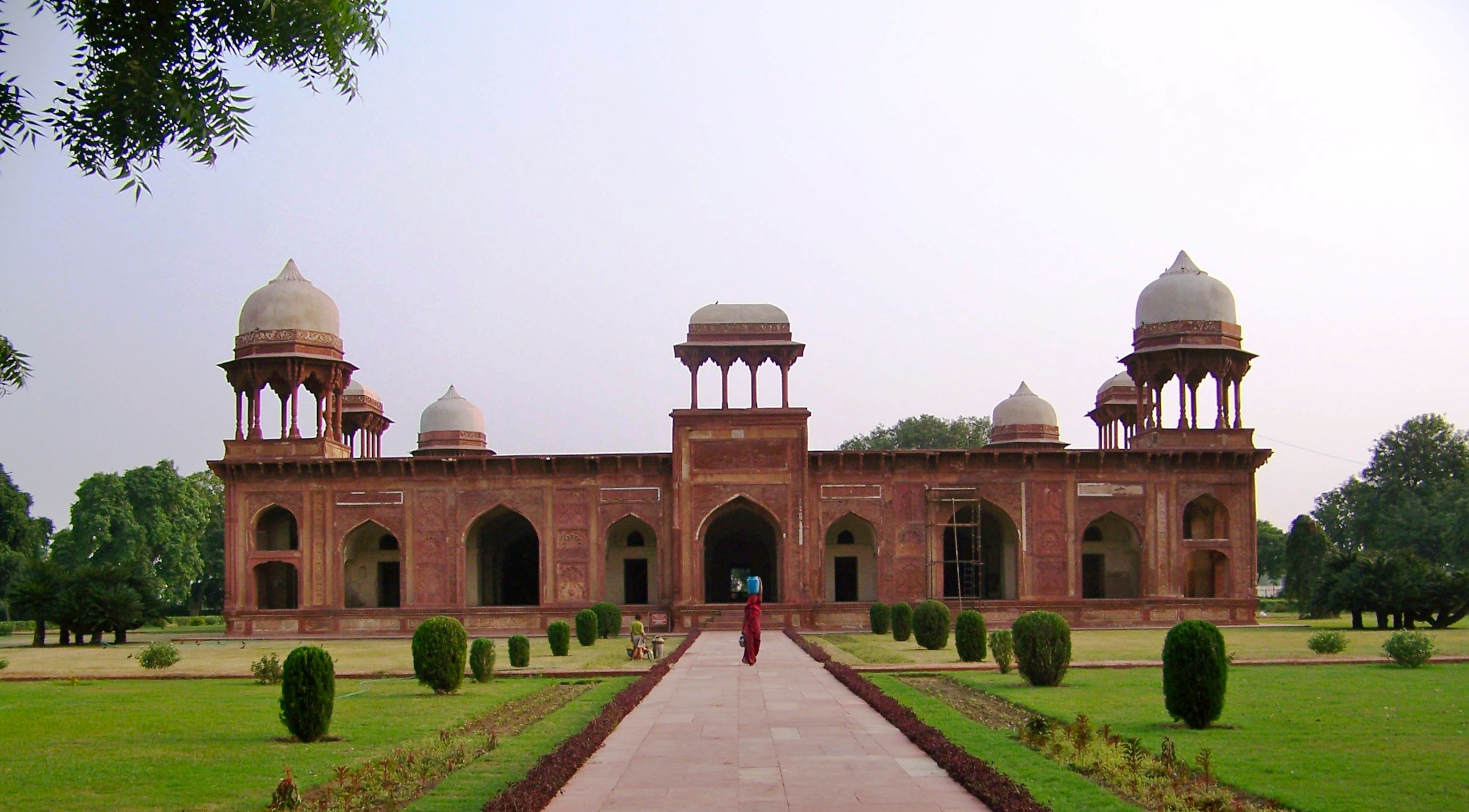 Palace of another one of Akbar’s wives, Mariam-Uz-Zamani is located here. The architectural style used here is Mughal and the artwork and carvings are worth appreciating. 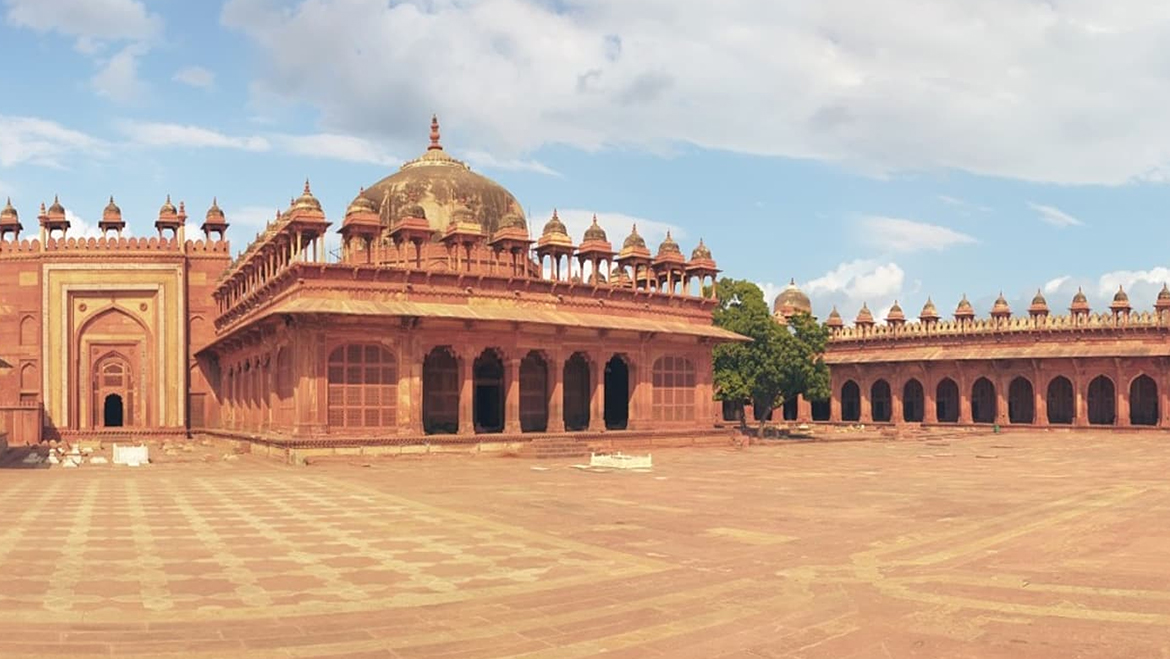 The Ibadat Kahana was the traditional place of worship inside the fort complex. Originally only Sunni Muslims were allowed to enter and pray in this complex; however, later it was opened for others as well. Many religious, spiritual, and philosophical debates took place here in the times of Akbar. 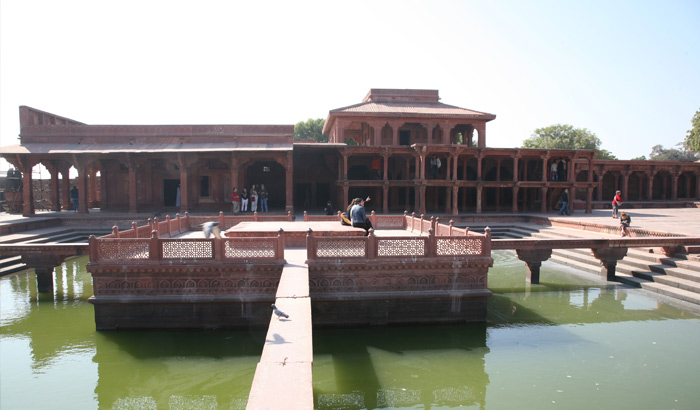 The Khwabgah was the royal bedroom which was used y the emperor himself. The building is elevated on the pillars and apart from the bedchamber, has a library and bathroom.

The great fort in Fatehpur Sikri is an architectural wonder and worth visiting by history buffs who want to understand more about the lifestyle of emperors. There are plenty of things to see and things to do in Fatehpur Sikri. If you too are keen to take the road trip from Delhi to Fatehpur Sikri, do consider taking a Revv Self-Drive Car on Rent in Delhi. Just download the Revv app or visit their website to get the car of your dreams without any EMI or Down payment. 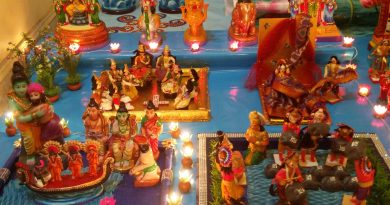 Take a Road Trip to Tamil Nadu during Golu Festival 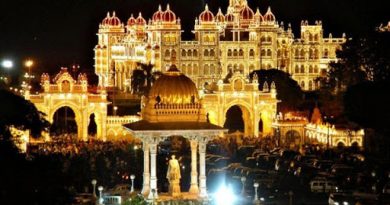 This Year Celebrate a Regal Dussehra at The Royal! 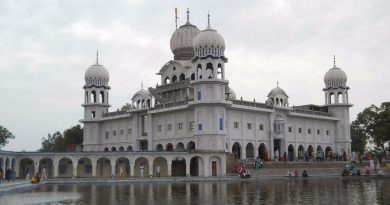